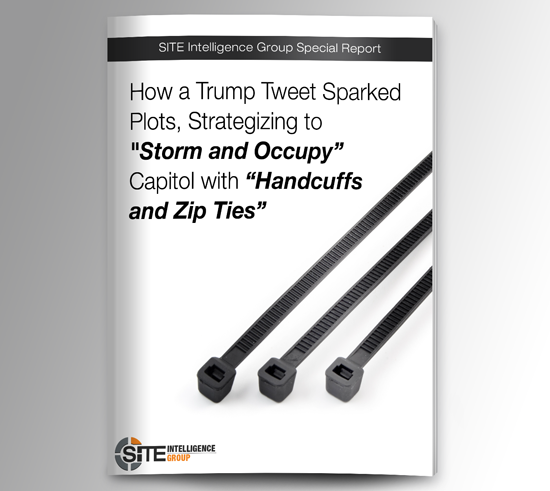 The January 6, 2020 siege on the US Capitol should not come as a surprise. Rather, it was preceded by a month-long frenzy of incitements, strategizing, and embrace of violence against lawmakers—fueled by Trump’s December 19 tweet promising that the event "will be wild." Many of the president’s supporters interpreted his words as "marching orders," declaring, “[Trump] can’t exactly openly tell you to revolt…This is the closest he’ll ever get.”

Many of these supporters’ calls for violence, which SITE reported on numerous times in the month leading to the event, ended up being consistent with many actions seen at the Capitol. Such messages included calls to storm the building, “encircle” Congress, arrest lawmakers, and “go after the traitors directly” by carrying out violent attacks against government officials.

These calls persisted into the day of the event, with such conversations evolving into tactical discussions of how to best carry out attacks. Some of these tactics were seen in use during the siege, with shared suggestions like “bring handcuffs and zip ties to DC” appearing to fit with the attackers photographed with zip-cuffs in the chamber of the Senate.

The following sections detail Trump’s toxic embrace of the event, the resulting hype-building and incitements among his most extreme supporters, and Trump supporters’ frenzy of threats and spontaneous escalations on the day of the Capitol siege. These sections include previous SITE reporting from the last month as well as yet-unpublished findings. 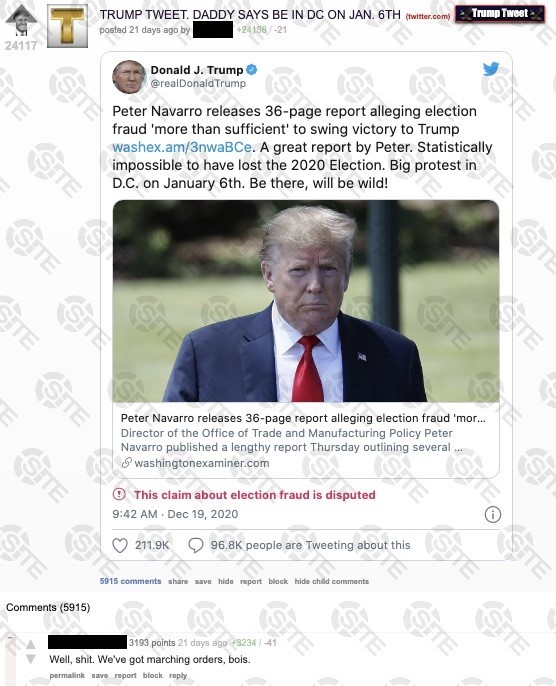 President Trump’s December 19 tweet, in which he urged his supporters to “be there” and that the event “will be wild,” was interpreted by many of his supporters as an explicit call for direct action, as SITE has reported on December 24. One of the most significant discussions took place in the notorious pro-Trump forum, “TheDonald.” One particularly popular thread pertaining to this tweet received over 5,900 replies and over 24,000 upvotes to date.

The general consensus among the users was that Trump had essentially tweeted permission to disregard the law in support of him. “Well, shit. We’ve got marching orders, bois,” read one post receiving over 3,000 upvotes.

Another explained, “[Trump] can’t exactly openly tell you to revolt…This is the closest he’ll ever get.”

Another claimed similarly, "’Will Be Wild’ is a hidden message for us to be prepared ....as in armed.”

“That's kind of how I took it,” another replied.

This understanding was shared by others on the forum. “Does Daddy want as armed or not?!?!” one asked, to which another replied, “I read that as armed. If everyone commits to constitutional carry, then how can they stop us?”

“Not telling you what to do but I will be open carrying and so will my friends. We have been waiting for Trump to say the word,” read one post. “There is not enough cops in DC to stop what is coming.”

As shown in SITE’s December 24 reporting, calls to storm the Capitol were prevalent among these incitements and seen across pro-Trump and far-right forums alike.

“If congress votes against the true will of the people, in the face of all the evidence of fraud and corruption, then yes, start marching INTO THE CHAMBERS. LET THE SOUND OF TRUE PATRIOTISM BE HEARD,” one user on TheDonald wrote.

“We must make them cower, along with Congress and SCOTUS,” another wrote.

Some posted the idea that storming the Capitol building should be followed by arrests of lawmakers. As one wrote, “We should be there in numbers so heavy and so protected that we are able to arrest treasonous members of the govornment.”

Replying to this post, one user noted, “And I think this is what Trump expects. Do not allow congress to certify a fraudulent election and get away with and don't allow any government forces to intimidate us.” In a post shortly after, the same user explained the rationale for acting violently against lawmakers:

I will be shocked if we just stand by waving a bunch of flags while they go right ahead and certify an illegitimate president. The idea of showing up to "protest" and air grievances should not be the goal. The goal should be that they WILL hear our voices or there WILL be consequences. The need to know that 100% or this will be a failure on epic proportions.

This is a historical opportunity that will change the world just like the signing of the Declaration of Independence or winning WWII. And we get to be part of it.

Success will be measured by forcing the DC rats too listen to our voices. That we will not accept a fraudulent election and their fraudulent chosen president. If they refuse, they do so at their own peril.

This sentiment—that the January 6 rally would not just be a rally—was a recurring theme of incitements to storm the Congress. Insisting that “simply protesting” won’t be enough to secure Trump’s second Presidential term, a user henceforth referred to as “Anon1,” who claims to be from Massachusetts, directly asserted that in order to “achieve an actual tactical victory” at the protest Trump’s supporters need to “storm and occupy Congress”, stating: “We will have to achieve a an actual tactical victory like storming and occupying Congress, to have the intended effect.”

Many of the users embracing the idea of attacking the Capitol or other government targets appeared to believe that Trump wouldn’t stop them from doing so. In the aforementioned post about congress members rejecting Trump’s perceived election “at their own peril,” the user even predicted, “I don't see Trump sending any federal resources or military in to help the local corrupt agencies. They'll be on their own.”

Such messages were also seen on other online venues. As early as December 26, far-right users on a pro-Trump Telegram group connected to Milo Yiannapolis' official Telegram channel were discussing potential attacks against the Capitol, with user “RC” suggesting "Proud boys and the patriots should storm all government building on 6 th including the capitol.”

As SITE reported on December 29, many neo-Nazis were similarly emboldened ahead of the protest. Neo-Nazis shared the President's December 19 tweet and promoted the event, with many doing so not out of support for the president but rather out of desire to sow chaos toward an accelerationist agenda.

Echoing users on forums like TheDonald, some neo-Nazis interpreted Trump’s statements as direct instigation to target Congress. On December 28, 2020, a prominent neo-Nazi user on Telegram posted a series of messages in a neo-Nazi chat group, underscoring that the neo-Nazi community “needs boots on the ground” for the D.C protest.

“That's the only way things are going to change," GFB underscored, suggesting that Trump supporters in D.C. on January 6 should "march into the capital building and make them quake in their shoes by our mere presence."

“The founding fathers were willing to give up their lives to ensure this country exists the least we can do is risk prison time to be heard,” the user wrote.

As calls for violent action against lawmakers continued into the week of the January 6 rally, conversations among those planning to participate began to escalate into tactical advice and planning. Many of these messages on TheDonald forum suggested that users planning to attend were sincere about their intention to attack the Capitol.

On January 5, a user on TheDonald forum—who claims to live in the Columbus, Ohio area—underscored that Trump’s supporters should “be prepared to secure the capitol building,” assuring, “there will be plenty of ex military to guide you.”

Anon, the same member to call for “storming and occupying Congress”, following Trump’s December 19 tweet announced on the day of the rally that he was in attendance. The user reiterated their past incitements by laying out desired criteria for an attack. “The objective is Congress” the user wrote, positing that Trump supporters should make sure the government officials “leave in one of two ways: dead of certifying Trump the rightful winner.”

The user detailed various scenarios of how to attack that day, encouraging those currently attending the protest to “encircle congress” and “make sure they can’t leave.”

Other suggested strategies included bringing “handcuffs and zip ties to DC” in order to conduct “citizen’s arrests” against the officials certifying the election. For example, in proclaiming they must no longer “tolerate” elected officials who “hate us and our country,” one user called on protesters to “barge into the Capitol through multiple entryways” and “apprehend these traitors,” seen in the following screenshot of the post:

These calls to bring zip cuffs were not specific to only one thread on TheDonald. One post, for example, was bluntly titled, “Consider bringing zip ties, citizen arrest.” Several users were receptive to the idea, with one appearing to escalate “Fuck zip ties, I'm bringing rope!” 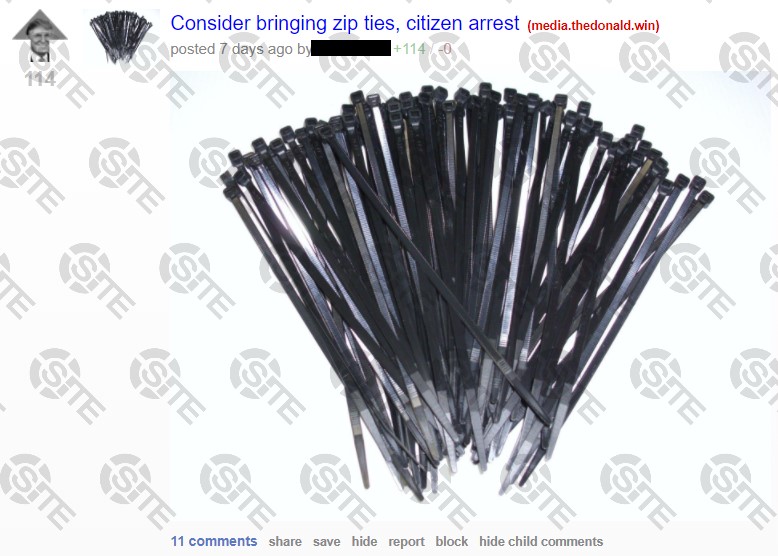 (More on these incitements can be read in a December 22 SITE dispatch here.)

As these reactions between different extremist communities show, the siege on the Capitol was sparked in no small part by President Trump’s own implicit calls for violent action, which many evidently responded to as directives.

The movement behind the siege on the Capitol building has only become more emboldened in the event’s aftermath. Trump-supporting extremists have already praised the siege as a “stunning success” and announced further armed protests, including the day of Biden’s inauguration.

As a member on TheDonald threatened: “No matter how all this plays out, its only the beginning.”