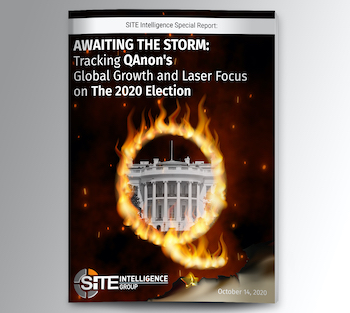 As the QAnon conspiracy theory movement becomes an increasingly impactful force around the world, the SITE Intelligence Group has composed a report analyzing its rapid spike in growth.

The report, titled “Awaiting The Storm: Tracking QAnon’s Global Growth and Laser Focus on the 2020 Election,” gives qualitative and quantitative breakdowns of QAnon accounts on Facebook and Telegram, two major hubs for the movement. It also features an opening letter by SITE Director Rita Katz regarding the fundamental changes within QAnon this past year and the urgent crisis its growth brings, given its spread of misinformation, use of far-right and anti-Semitic narratives, and inspiration of violence.

As the report’s findings show, QAnon social media group and channel creation skyrocketed in early Spring of 2020 as the full extent of the coronavirus pandemic hit the world, giving conspiracy theories a well-suited environment to fester in. The report also shows how the movement became so dominantly prioritized on the reelection of Donald Trump, who has become a larger focus among QAnon adherents than “Q,” the self-professed government insider whose cryptic messages founded the movement.

However, as Facebook and others major platforms escalate their removals of QAnon content and activity, the movement will likely resort to new measures to disguise itself. QAnon will also surely look to the wealth of alternative social media platforms offering safe haven—some of which welcoming the movement with open arms.

Below is a message from SITE Director Rita Katz:

Media can inquire about receiving the report by emailing [email protected].