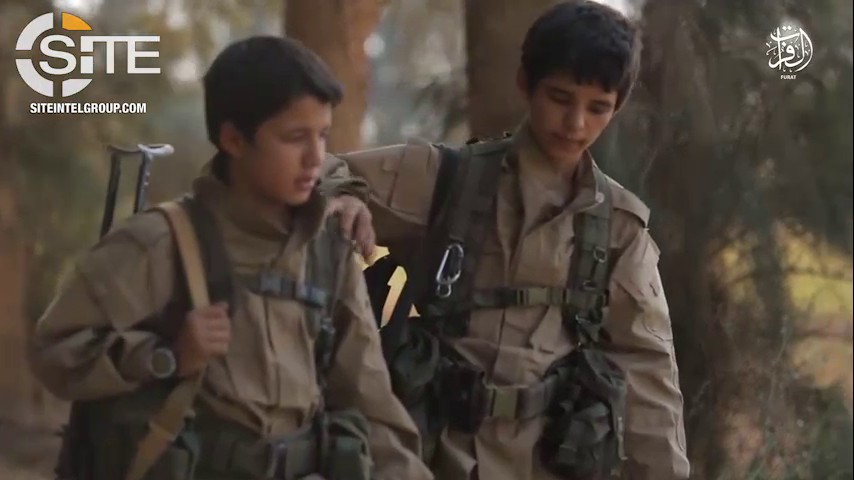 The Islamic State's (IS) Furat Province, a division in western Iraq, presented in a video the story of a slain Uzbek fighter's children following his footsteps in jihad, where one operates weaponized UAVs.

The 17 minute, 38 second, Arabic-subtitled video, entitled, "The Profit from the Transaction," was released on October 4, 2017. While the beginning of the video showcases several Uzbek fighters who were killed in battle or carried out suicide operations, it focuses on one, Ali Abu al-Zubayr, who, prior to his death, had urged his wife to raise their children to embrace jihad. An undented fighter spoke about Ali, saying that he had lived in Europe for a "long period of time" and had a business in trade, but he sacrificed "prosperity" and "luxuries of life" so as to support Islam.

One of Ali's children, Al-Zubayr Al-Uzbeki, said that he saw his father's dead body after accompanying him on the battlefield, and another, Abdul Rahman al-Uzbeki, identified himself as becoming proficient in the field of UAV operation. Footage shows Abdul Rahman using a remote control and screen to direct a weaponized UAV to drop a shell.

The video is available here:
http://sitemultimedia.org/video/SITE_IS_FuratProvince_Profit_Transaction.mp4

Following is a translation of the Arabic subtitles:

In the Name of Allah, the Most Gracious, the Most Merciful

[A fighter encounters a dead colleague on the battlefield]

Those immigrants have stories told by their bravery, and their valor on the battlefields is evident in scenes not far away from these natural settings.

My brothers, do not procrastinate from jihad. If you are not handicapped then rush to the battlefields, and Allah will bring you victory and strengthen your faith. Rush for Allah’s acceptance.

Good traits beautified those brothers’ characters, those whose souls rushed towards martyrdom before their feet, yearning for it after a long wait in the land of Sham [Syria]. It was the wish of Allah, however, to keep them for the battles against the Rafidha [Shi'ites] in Iraq.

Allah facilitated for three of them a martyrdom-seeking operation in al-Rutbah. In the meantime, Abu Muhammad al-Uzbeki, may Allah accept him, fell in the land of Kubaysa.

The Profit from the Transaction

As you know, my brother al-Zubayr and my brother Abdul Rahman, your father, may Allah accept him, lived in Europe for a long period of time. Allah graced him with five children. He also had a large trading business. Yet, your father, may Allah accept him, knew that all this prosperity and luxuries of life came at the expense of his religion and that of his family and his offspring. So he became enthused and immigrated to the lands of the Islamic State, leaving behind the luxuries of life in Europe. His only concern was to support the religion of Allah and to defend it.

Caption: Footage recorded by the brother Abu al-Zubayr, may Allah accept him

Praise be to Allah, since we immigrated to the Islamic State, my father was careful in raising us. He used to take us with him to battle. I accompanied him in his last battle. After all the roles were distributed over the brothers by the leaders, my father was with the attackers and I was with the brothers in the detachments, because we were preparing for a strong attack. The battle began at midnight. The sound of gunfire was heard loud everywhere. The brothers eventually came carrying the body of a man covered in blood, and I looked at it, and it was my father. He received that which he yearned and that is martyrdom. Verily, we are from Allah and to Him we return.

There is something for everyone who has a grave here; some are rejoicing and others are being tortured. We ask Allah for health and forgiveness. As for the owner of this grave I consider him a martyr who has gone to Allah.

Just as the Messenger of Allah, Allah's peace and blessings be upon him, said: one of their characteristics is that they are spared the torture of the grave, and they intercede for 70 of their relatives. I consider him one of those martyrs.

O Allah, we believed what You have descended, and followed in the footsteps of Your honorable Messenger, so guide us to the path of wisdom. O Allah! Make me and my mother and those who are good of my brothers join my father, and gather us together in the luxurious heavens! O Allah! May You respond to my prayers!

Our brother Abu al-Zubayr, may Allah accept him, was harsh on the disbelievers and merciful to the believers. In battles he was distinctive with his bravery over the others, and he was keen to shed the blood of the disbelievers as well as his own in the cause of Allah. He would inspire his brothers during the attacks with his valor.

In the battle in which Abu al-Zubayr was ultimately killed, the fighting began at midnight. Abu al-Zubayr rushed out, yearning for martyrdom. He attacked an apostate gathering and, despite the strong defense shown by the enemy, the mujahideen managed to reach them. However, one of the apostates was monitoring the brothers and he fired his gun with a bullet that made Abu al-Zubayr depart this decaying world and move on to the everlasting life. Allah graced Abu al-Zubbbayr with what He graces the martyrs.

The Muslim woman has a crucial role in the ongoing war between truth and falsehood, and this is based in protecting and raising the generations on the Book of Allah and the traditions of His Messenger, Allah's peace and blessings be upon him.

After our immigration to the Islamic State, and my father joining the army of the Caliphate, my father would always urge my mother to carefully and properly raise us on Tawhid and love for jihad. When my father was killed, may Allah accept him, we found patience and consideration from my mother, and her doing what my father had urged her to do in terms raising and taking care of us.

Caption: Our only goal is to make the Shariah of Allah prevail over the whole earth, for this is the methodology of the Messenger of Allah, Allah's peace and blessings be upon him. I swear by Allah that the religion of Allah will be victorious. We have only one of two good fates; if we are victorious we are the liberators, and if we are killed then this would be the greatest of our wishes.

Al-Zubayr is looking into his father’s will, the words of which he wrote with the blood from his heart:

Peace be upon you, and Allah's mercy and blessings. I am Ali Abu al-Zubayr and this is my will to my wife. Raise my children until they become of those who bring victory to the religion of Allah, and are always prepared to fight the enemies of Allah, and to spend all their efforts for the cause of Allah and to be only in the front lines, and to carry out a martyrdom-seeking operation for the cause of Allah.

The sons of Abu al-Zubayr, may Allah accept him, knew that the path for which their father had shed his blood is undoubtedly the path of truth. So the youth joined the convoy of the mujahideen in order to prepare themselves for the days of combat and the battlefronts to fight for the cause of Allah.

My father, may Allah accept him, urged me to learn what would be beneficial for me. Today I am learning new techniques for battle, which would be, Allah permitting, much more devastating to the apostates.

I specialized in the field of drones, and unto Allah is all praise.

Here it is today, the fruit of Abu al-Zubayr's reliance upon Allah, and his leaving behind his children while he is sure that Allah will look after them if he was killed, following in the footsteps of Allah's Prophet Ibrahim, peace be upon him, when his wife Hagar asked him: “Why are you leaving us here in this desert without any water or food?”. He pointed with his head to the sky as if he was saying: “I leave you to Allah where nothing is lost”.