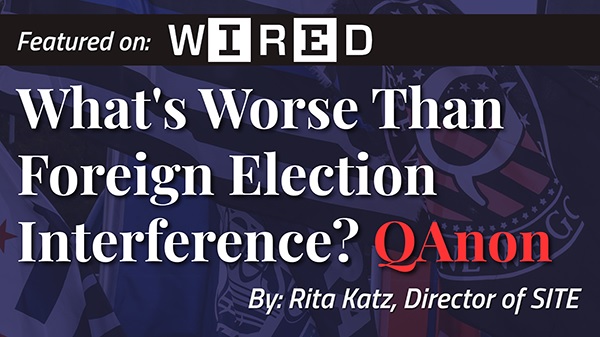 Last week, US officials determined that a threatening letter sent to a voter from a fake Proud Boys email address was the work of the Iranian government, adding more emphasis to US intelligence reports that countries like Iran and Russia seek to disrupt US elections.

It also seemed like a strange, if not ill-fitting, example to focus on. Are blatantly fake emails from an adversarial government actually representative of election meddling in 2020?

Not by a long shot. The more threatening type of election interference is that which is, by design, hard to identify—even when you’re looking right at it. Something like what we now see in hindsight from the 2016 Election: manipulation of existing sentiments and movements, prolific propaganda machines, distorted news reports, online trolls who blend into the fray. In essence, what we’re now seeing with QAnon.

(This article was originally published in WIRED. You can view it here.)

What Is Keeping QAnon Alive?

Pound for pound, there isn’t a more fitting movement than QAnon for a state actor to zero in on: It is ideologically malleable, it's driven by misinformation, and its adherents embrace violence and voter intimidation. Indeed, social media companies like Facebook and YouTube play major roles in QAnon’s growth, and their newly aggressive stances against the movement mark steps in the right direction.

However, as I’ve said before, apart from these social medial companies, QAnon has a lot to fall back on. The heart of QAnon’s web presence is kept alive by complicated, entangled arrays of tech companies. And while some more reputable companies do so unwittingly, networks of far shadier companies—shadowy cabals, if you will—do so very willingly.

The story of 8kun is a perfect case study.

For about a year and a half, “Q drops”—the cryptic messages from supposed government insider “Q” that launched the QAnon movement—were posted exclusively on a site called 8chan. The platform was owned by a man in his mid-50s named Jim Watkins, whom multiple journalistic investigations suggest to either be or have contact with the person behind the “Q” alias. But after August 3, 2019, when Patrick Crusius, who’s been charged for killing 23 people in El Paso mass shooting, followed suit with other far right attackers by uploading his manifesto to 8chan, public outcry grew against the site. Cloudflare, the service provider that once defended its hosting of 8chan, finally changed its position and dropped the site. With that, all messages from “Q” ceased.

If he wanted to revive 8chan, Watkins needed to link up with a company that wouldn’t cave to public pressure. So, in the two months following the El Paso attack, Watkins established connections with a web hosting company called VanwaTech and, by October, he launched 8chan’s successor message board: 8kun. Sure enough, the same day 8chan reemerged as 8kun, “Q” messages resumed.

Watkins was also setting up other projects around 8kun during this time. In September 2019, he launched a company called Is it Wet Yet. In a press release in early November, Is it Wet Yet was characterized as “an information hub for all the projects we’ve been working on and a launchpad for future endeavors,” including 8kun. Less recognized than its 8kun counterpart, Is it Wet Yet was even able to register with Cloudflare, the company that ditched Watkins’ 8chan just a couple months earlier.

Meanwhile, VanwaTech provided 8kun the server space and protection from DDoS attacks it needed. VanwaTech is based in Washington state and headed by a young man named Nick Lim, who has carved a niche for his small company: hosting the worst parts of the Internet. Several of its domains are unsurprisingly registered under a company called Epik, whose founder, Robert Monster, has registered similarly problematic sites over the years. Among them was Gab, the notorious platform where Robert Bowers, who’s been charged with killing 11 in the 2018 Pittsburgh synagogue shooting, festered in radicalization. Monster defended Gab in a blog post less than a week after the event.

Beyond their intersections as hosts and registrars, Lim and Monster are actually in business together. In 2019, Lim sold a cyber security and DDoS protection provider called Bitmitigate to Monster, which Monster claimed in a blog post can help protect sites like Gab. Lim claims he maintains partial ownership of both VanwaTech and Epik. Lim has cited free speech motivations behind his business, and stated in one interview that he sees his hosting of sites like Daily Stormer, a prominent white nationalist blog, as a way to “get [his] service out there.”

Until last week, VanwaTech protected the QAnon and other sites on its servers via CNServer, a company with offices in the US and China. On its website, CNServer touts it has the “highest internet capacity to China … in North America” and “US and Hong Kong local operation teams.”

CNServers is run by a man named Zhijian Chen, who heads several other companies with business in China. In 2006, Chen was fined $84,000 by the state of Washington for scamming users with a phony anti-spyware program. You know those scammy ads that warn that “MALWARE” has been detected on your computer? Chen and others used those types of ads to gain access to victims’ computers, delete their adware settings, and carry out fake removals of non-existent viruses.

On October 16, QAnon sites on VanwaTech servers went down and then remerged shortly after. A couple of days later, an article in the Guardian reported CNServers had cut ties with VanwaTech “upon learning about [its] 8chan ties.” However, the sites reappeared shortly after, with nothing changed on them. Rather, they are now protected by a Russian-based CDN company called DDoS Guard.

Why This All Matters

The story of 8kun and other QAnon-boosting websites—kept afloat by companies linked to America, China, Russia, and elsewhere—gives a sense of how complicated modern-day election interference is. Of course, if a state actor were to some extent behind QAnon’s peculiar boost this past year, it would be hard to prove until long after the fact. It took years to uncover the massive extent of Russia’s 2016 meddling. According to Facebook, in 2016 Russia used thousands of ads and fake accounts that reached as many as 126 million Americans—more than half the amount of eligible voters in the US.

Still, it’s hard not to sense a repeat of 2016 playing out in the form of QAnon. It has become an international movement, with adherents in the US and abroad uniformly fixated on Donald Trump. One can read the toxically obsessed posts, articles, and artwork pushing for his reelection in English, German, Spanish, and hosts of other languages spread across the internet.

There’s more to the picture than some outwardly shameless players, though. VanwaTech is easy to spot as a red flag, but there are plenty of reputable tech companies helping hold QAnon up, unknowingly or not. Cloudflare protects at least 20 QAnon websites from DDoS, including WeGo, a social media platform created entirely for QAnon adherents. Other legitimate companies like GoDaddy, EraNet, and others also fall into the mix.

Such companies shouldn’t wait until QAnon’s election-meddling status is likely confirmed before acting against it. The movement has embraced voter intimidation and threatened violence if the election is “stolen” from Trump. Yet more reminders that these aren’t harmless basement-dwellers; they are an FBI-deemed domestic threat with a documented history of violence.

In some ways, the problem of QAnon is larger than just QAnon. The internet—the place we rely on more than ever to inform ourselves, meet new people, socialize, work, shop—is broken. Like a virus-filled hard drive that makes the computer harder and harder to use. I’ve spent the past 20 years of my life tracking how groups like al-Qaeda were using the internet to grow and recruit, but QAnon and the like are doing something different—they’re literally ruining vast swaths of the internet, to the degree so many can’t tell genuine information from fake information.

Ahead of the election, QAnon poses a major threat to US democracy, not to mention that of other countries the movement has spread to. From Germany and Italy to Israel and Turkey, it seems every country is vulnerable to QAnon. But in the long term, it’s symptomatic of a much deeper crisis.

(This article was originally published in WIRED. You can view it here.)