The Technology & Terrorism service monitors and analyzes hacking campaigns and groups across all ideologies (or lack thereof)—from those soliciting stolen data on the dark web, jihadist-motivated hacking groups, and everywhere in between. Contact [email protected] or call us toll free 1-800-680-2326. 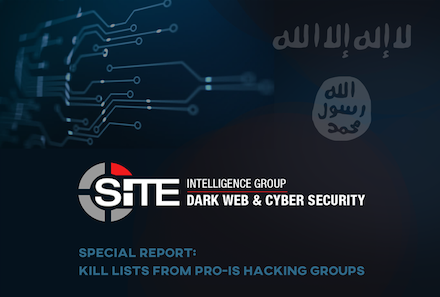 In recent months, “kill lists” released by pro-Islamic State (IS, also known as ISIS) hacking groups have dramatically increased in frequency and expanded in scope, according to a new report composed by the SITE Intelligence Group.

In response to heightened alert among government agencies and the public, the SITE Intelligence Group has composed a report analyzing pro-IS kill lists released between March 2 and May 2 of 2016.

SITE’s report, titled, “Kill Lists from Pro-IS Hacking Groups,” chronicles and analyzes these lists while providing information on the groups producing them. Importantly, the report clarifies that these lists are not actually released by IS itself, as many news reports have implied, but instead by a network of IS-supporting hacking entities with varying levels of connection to the group.

“Jihadi kill lists are not at all a new thing,” says SITE director Rita Katz. “However, lists released by pro-Islamic State hacking groups are quickly forming a genre of their own, especially when noting the differences in which types of targets they identify.

The report may be accessed here: