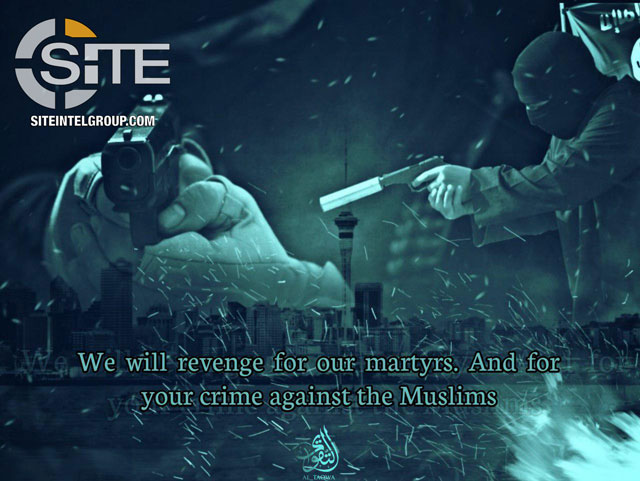 In response to the deadly attack at two mosques in Christchurch, New Zealand, jihadists, both al-Qaeda (AQ)- and Islamic State (IS)-aligned, expressed their outage in the form of demanding and inciting for revenge.

On Telegram channels and groups on March 15, 2019, users distributed photos of the shooter's gun, with an explanation of each name and date he wrote on it, and a copy of the video the shooter live-streamed, showing disturbing footage of shooting Muslim congregants to death at the mosques. Along with this media, jihadists wrote messages in Arabic and English, an incitement poster, and their own version of a gun for an attack, on which New Zealand and 2019-3-15 is written. 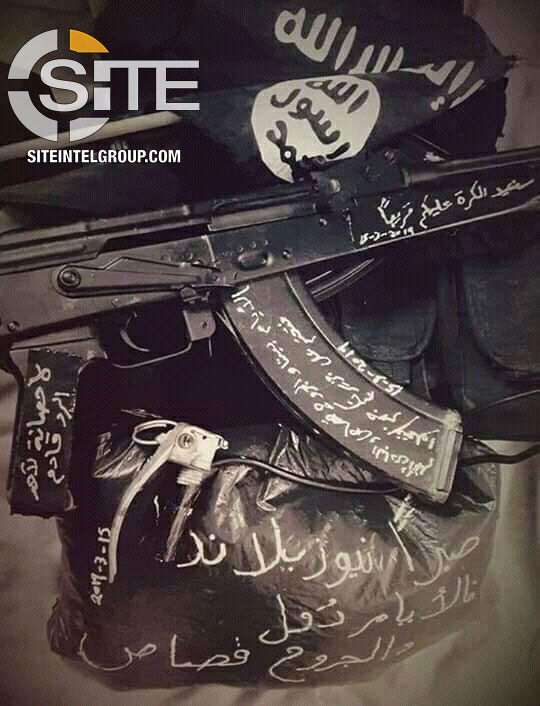 User "Muwahhid al-Wathiq," wrote, for example: "Every sincere Muslim must take revenge. Set fire to them all over the earth, and attack their churches and burn them down over them, so that there may be a massacre in every place in the world".

Another, "al-Aseef al-Baghdadi," called on fellow IS supporters to spread incitement propaganda on social media, namely Facebook and Twitter, stating:

The prevailing argument among IS supporters is that the "Crusade" waged by the West in the name of "war on terror" does not target the IS alone in its areas of operations, such as Baghuz, Syria, but is worldwide, effecting all Muslims. This is also shared by the Syria-based pro-AQ ideologue Abu Abdullah al-Shami, who published a message on his Telegram channel, writing that the "situation of the Sunni trench" has extended to the West, evidenced by what was seen in the attack in New Zealand, and that "the language of blood is not confronted with the language of surrender and peaceful claims, or with the slogans of tolerance and peace, but with the language of Sunni blood, to defend, proceed, and target".

On the pro-IS "Supporters of the Truth" English channel, the administrator called the New Zealand attack "a classical example why the Crusaders deserve no mercy at all," and urged Muslims everywhere to "wake up".

Also, amidst it republishing posters from the past year inciting for attacks in the West, the IS-linked al-Taqwa Media Foundation published a new one, displaying the Sky Tower in Auckland, New Zealand, and English text reading: "We will revenge for our martyrs. And for your crime against the Muslims". 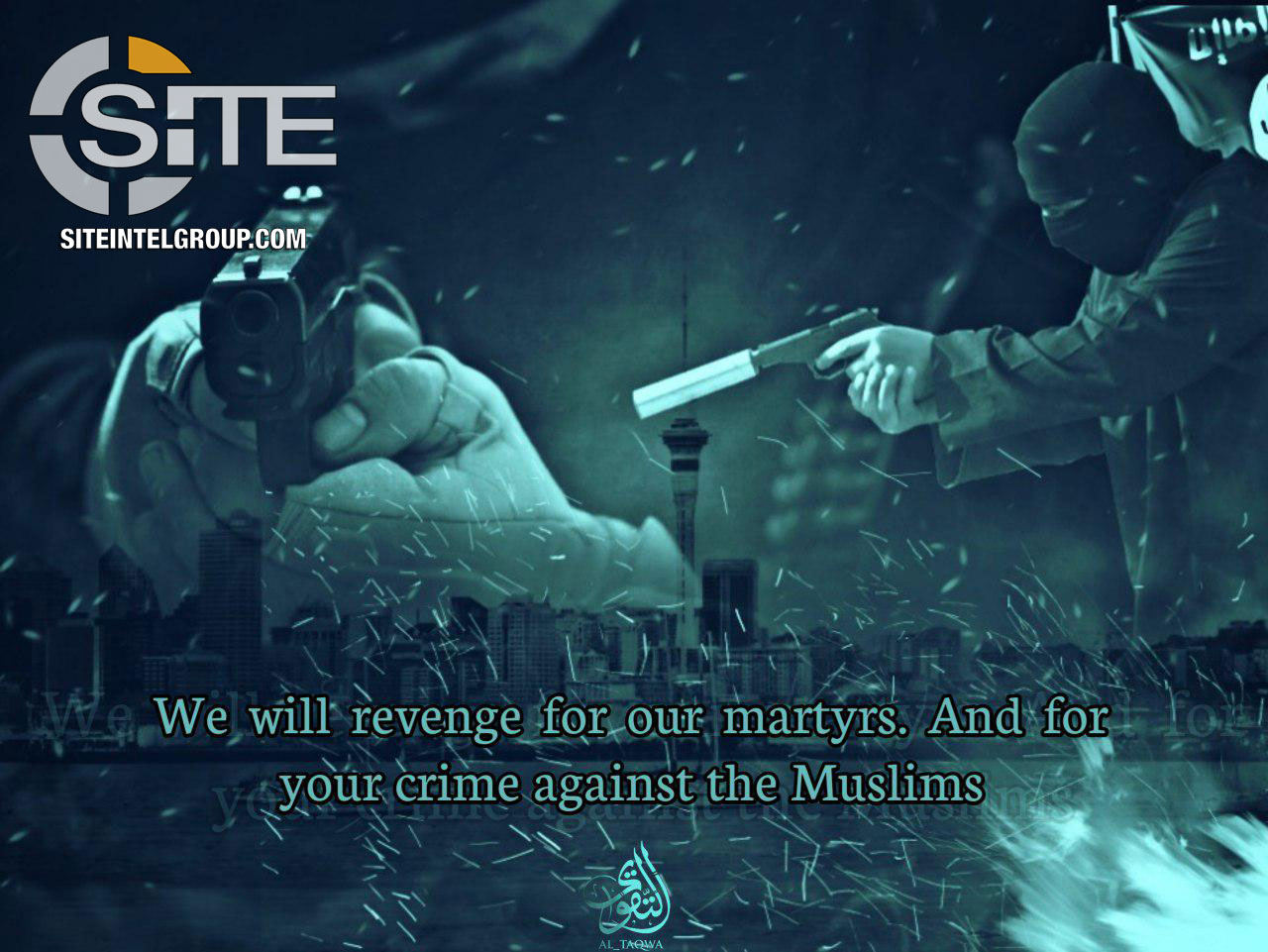 Following is a translation of the Arabic messages and copy of the English:

Let those who are associated with Islam wake up, for terrorism is not attributed to the monotheists Muslims alone. They stomp on the satellite channels, which curse the mujahideen who are defending the Shariah of Allah, and they repeat like parrots that the mujahideen are Kharijites and terrorists, while America is bombing women and children with all forms of deadly and lethal weapons. Even atomic bombs hit the monotheists in the town of Baghuz. Yet, their hearts are with America and they are frustrated and angered by the mujahideen.

All in the media are agents of the Crusaders, and it is they who determine the track of the people. Their hearts are attached to the Crusaders and ignited against the monotheist Muslims.

Every sincere Muslim must take revenge. Set fire to them all over the earth, and attack their churches and burn them down over them, so that there may be a massacre in every place in the world.

The disbelievers from among the Jews of the Arabs, began to laugh at the flock with denunciations and condemnations, and that the "heavenly" religions prohibit murder and that it is shameful and forbidden, etc.

I say to you, the sewer rats, that nothing will benefit your masters except bullets, slaughter, and fire, and empty words mean nothing.

And the wolves of the State, Allah willing, you should lookout and watch for them, Allah willing, regardless of what you take of security measures and precautionary means.

We will invade them with the boys of the jungle * And in the dawn it will be good news.
With great efforts we will weaken you * And with iron we have filled our hatred.
Spread terror with secret information * And rainstorm is remembered by a drop, and then it is followed by heavy rain

On this blessed day, we mourn the dozens of Muslims who were killed in a mosque in New Zealand at the hands of a hate-filled, Australian Crusader disbeliever...

This is a message to all Muslims around the world... know that the war by the Islamic State with the Crusader states and their nationals is in defend of Islam and Muslims, and that the war waged by the disbelievers targets all Muslims on the face of the earth, where there is no difference to them between a monotheist fighter bearing arms and a monotheist away from the jihad and conflict...

O supporters of the Caliphate, do not hold back from supporting the Muslims everywhere, and take this opportunity to incite the believers to immigrate and fight, as this is the least you can offer to your Muslim brothers everywhere...

Allah is sufficient unto us, and He is the best Advocate...

- The Sunni trench is no longer confined to the cities of the Sunni people in Sham [Syria], Iraq, Libya, Afghanistan and elsewhere, where cities are destroyed and Muslims are killed under the slogan of anti-terrorism.

- The situation of the Sunni trench was moved by the massacre at the New Zealand mosques to the Western countries themselves. However, this time, with clear slogans and live broadcasts and written messages, confirming the continuation of the Crusader wars, and clarifying that what is ruling the conflict between the international regime and its regional and local criminal instruments is the language of blood, and the goal is the genocide of the Sunnis and to subjugate them.

- I ask Allah to accept our dead as martyrs, and make them reside in the Paradise above, and enable us to kill them [the enemies], and to conclude a rational matter for all the Muslims, in which their followers are cherished and their enemies are humiliated.

New Zealand attack is a classical example why the Crusaders deserve no mercy at all, and why they should be massacred whenever an opportunity arises

The fact that their armies are slaughtering us in our lands, bombing mosques, destroying buildings and incting savage animals like communists and rawafid on us isn't enough for them so they are loading their weapons and killing us even inside of mosques in their countries