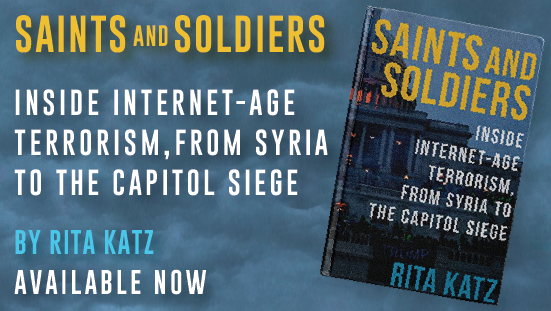 Inside Internet-Age Terrorism, From Syria to the Capitol Siege by Rita Katz
Published by Columbia University Press

More than a decade ago, counterterrorism expert Rita Katz began browsing white supremacist and neo-Nazi forums. The hateful rhetoric and constant threats of violence immediately reminded her of the jihadist militants she spent her days monitoring, but law enforcement and policy makers barely paid attention to the Far Right. Now, years of attacks committed by extremists radicalized online—including mass murders at a synagogue in Pittsburgh and mosques in Christchurch, New Zealand, as well as the Capitol siege—have brought home the danger. How has the internet shaped today’s threats, and what do the online origins of these movements reveal about how to stop them?

In Saints and Soldiers, Katz reveals a new generation of terrorist movements that don’t just use the internet, but exist almost entirely on it. She provides a vivid view from the trenches, spanning edgy video game chat groups to what ISIS and Far-Right mass-shooters in El Paso, Orlando and elsewhere unwittingly reveal between the lines of their manifestos. Katz shows how the online cultures of these movements—far more than their ideologies and leaders—create today’s terrorists and shape how they commit “real world” violence. From ISIS to QAnon, Saints and Soldiers pinpoints the approaches needed for a new era in which arrests and military campaigns alone cannot stop these never-before-seen threats. 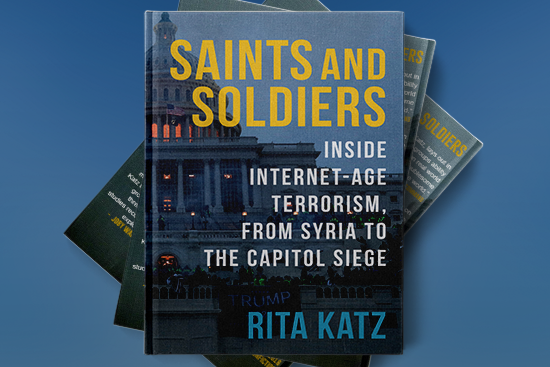 "Saints and Soldiers, by skilled terrorist hunter Rita Katz, lays out in excruciating detail the ongoing process of extremist and terrorist groups ability to live on the internet in obscurity. Her investigating and reporting on real world organizations and events is detailed, impressive and portends a troublesome future for free societies around the world."
General Doug Brown USA (ret) 7th Commander US Special Operations Command

"Saints and Soldiers is an immensely timely and important book that draws on the author's decades-long research, monitoring, and analysis of online terrorism and extremism. Utilizing a unique array of previously unpublished, primary sources, Rita Katz has produced a highly original, immensely authoritative, and absolutely compelling depiction of the violent Far-Right extremist movement today, its recent evolution, and likely future trajectory."
Bruce Hoffman, author of Inside Terrorism

"Rita Katz provides a detailed, compelling, and disturbing account of how online extremist cultures create terrorists and shape the violence they commit. Drawing on her remarkable expertise on terrorism online, Saints and Soldiers offers readers a deep dive into a wide range of terrorist and extremist groups, showing how their believers interact in the online ecosystem and why their hateful behavior reflects a global society in crisis."
Daniel Byman, author of Spreading Hate: The Global Rise of White Supremacist Terrorism

"Penned by one of the country’s most astute observers of extremist movements, Saints and Soldiers is both a warning and a call to action. Rita Katz reveals the surprising connections between Islamist militants and violent groups on the far right and explains why the latter now poses a far graver threat to Americans and to democracies around the world. Through case studies recounted in alarming detail, Katz shows how radical organizations are exploiting social media to extend their reach and amplify their power. "
Joby Warrick, author of Black Flags: The Rise of ISIS, winner of the 2016 Pulitzer Prize for General Nonfiction

WHERE TO GET YOUR COPY

Saints and Soldiers by Rita Katz is available for purchase as hardcover, audiobook, and e-book.

The book is also available for purchase via Columbia University Press,
Barnes & Noble, and other bookstores.