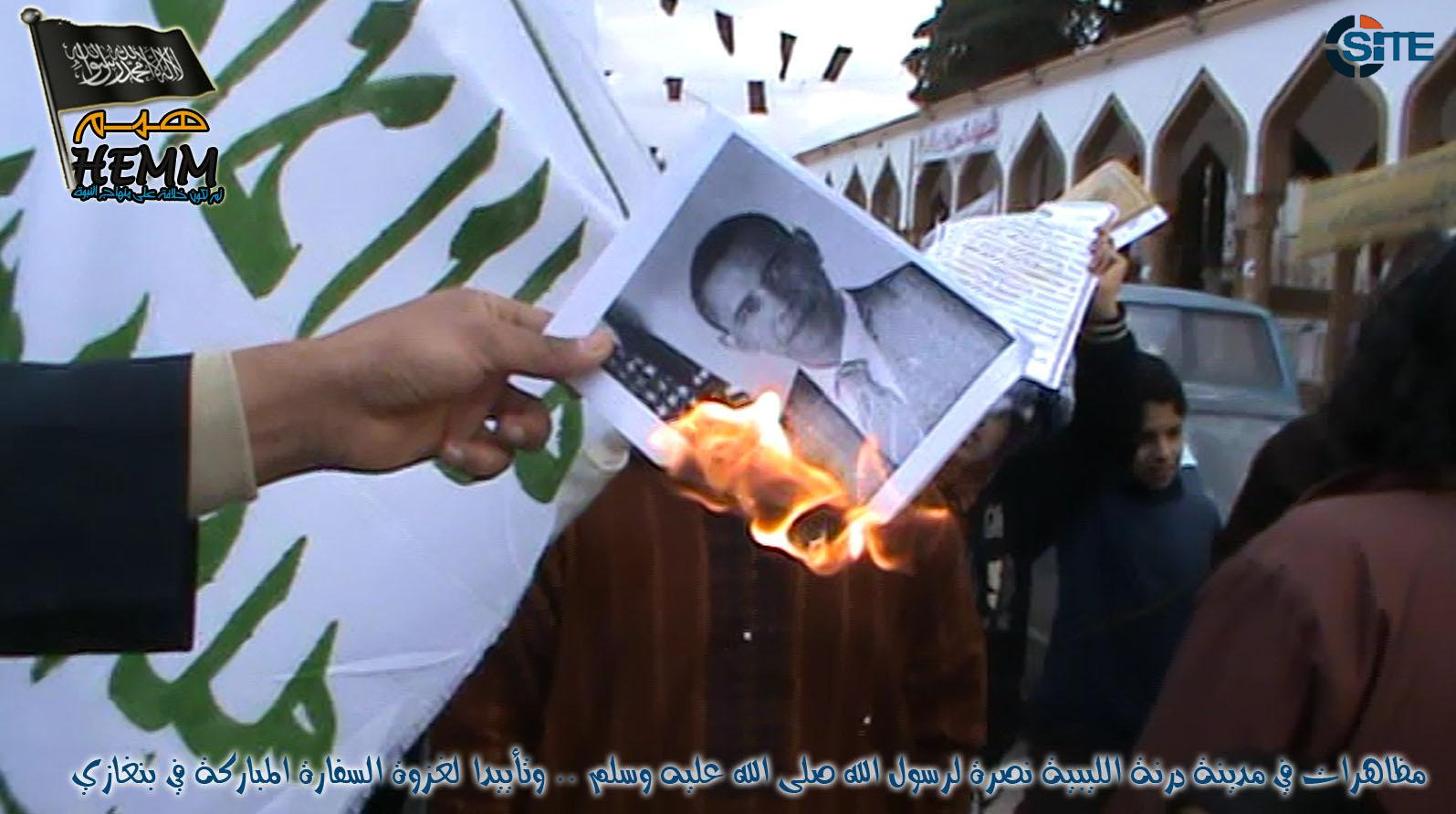 {Image: Protestors in Derna burn a picture of Barack Obama}

In the months following the death of Muammar Gaddafi and the National Transitional Council's declaration of the end of the Libyan revolution in October 2011, militant Islamist factions emerged in Libya demanding Islamic Shariah as a form of governance and carrying out attacks on Western interests, for example, "Brigades of the Imprisoned Sheikh Omar Abdul Rahman" and "Ansar al-Shariah Brigade." The deaths of US Ambassador to Libya John Christopher Stevens and three other Americans amidst a violent protest at the American consulate in Benghazi on September 11, 2012, come after other attacks in the city, including the June 11, 2012, firing of a rocket-propelled grenade (RPG) at the vehicle of British Ambassador Sir Dominic Asquith; the June 6, 2012, bombing at the American consulate; and the May 22, 2012, firing of a RPG at the offices of the International Committee of the Red Cross (ICRC). These attacks and the incident at the American consulate in particular demonstrate an increasing danger posed to Libya and the West by these groups, some of which support al-Qaeda and align themselves with its ideology.

A group calling itself "Brigades of the Imprisoned Sheikh Omar Abdul Rahman" had issued communiqués claiming responsibility for the May 22 ICRC attack and the June 6 bombing at the American consulate, and released videos of both. In its message regarding the attack at the consulate, the Brigades called it an act of revenge for the drone strike that killed al-Qaeda official Abu Yahya al-Libi in Mir Ali, North Waziristan. Also, echoing a statement from former al-Qaeda leader Usama bin Laden, the group declared: "We say to America and the enemies of Islam: You will never dream of security and safety as long as we don't live it as a reality in the lands of Muslims." The Brigades has not issued a message since June 12, when it uploaded the video of the consulate bombing on YouTube.

Another group, "Ansar al-Shariah Brigade," which was reportedly behind the June 18, 2012, attack at the Tunisian consulate in Benghazi, but denied the accusations, is also active in Libya. Ansar al-Shariah, meaning, Supporters of Islamic Law, demands the institution of Shariah-based governance in Libya and has taken measures against what they consider un-Islamic activities such as worshipping shrines, smoking cigarettes, and drinking alcohol. For example, the group posted four pictures on its Facebook page on September 3, 2012, showing cigarettes, drugs, and vodka it allegedly confiscated. Ansar al-Shariah Brigade is also reportedly behind the destruction of shrines, including a Sufi shrine in Tripoli, which it denied, although the Brigade stated that it supports such acts.

On August 31, 2012, one day after the al-Qaeda-affiliated Islamic State of Iraq (ISI) issued a communiqué threatening the Iraqi government with consequences should it continue to carry out death sentences on Sunnis held in its prisoners, Ansar al-Shariah Brigade posted pictures of its members demonstrating in support of the Sunni prisoners. In some of the pictures, members carry the black flag that the ISI took as its banner. Other pictures show Brigade members doing road repair work and distributing candy and preaching materials to hospital staff on Eid al-Fitr, and in some of the pictures the members carry rifles and wear army camouflage pants. 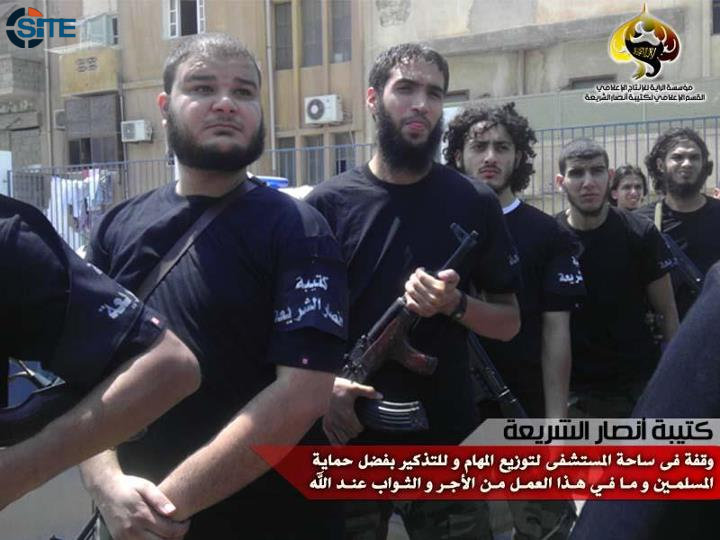 Responding to the events at the American consulate, an unidentified representative of Ansar al-Shariah Brigade held a press conference in al-Shohada' hospital and congratulated Libyans for their protest and uprising. The protest, he said, was sparked by the film "Innocence of Muslims," which was produced and directed by an Israeli Jewish man living in America, Sam Bacile, and promoted by Terry Jones, the Florida pastor behind "International Burn a Koran Day." The film insults the Prophet Muhammad, and as noted by the Brigade representative, was also promoted by an Egyptian Coptic blogger. The representative declared that the response by Muslims to the film should be "decisive" and "relentless," but claimed that the group did not participate in the violent protest. 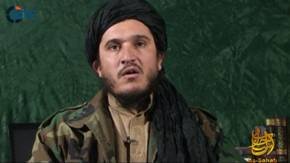 A third group, which calls itself "Brigades of the Martyr Attiya Allah al-Misrati," issued a message on August 5, 2012, rejoicing in the armed attack on a residence of ICRC staff in Attiya Allah's hometown of Misrata, Libya. Attiya Allah AKA Jamal Ibrahim Ashtiwi al-Misrati, a senior al-Qaeda official, was killed in a US airstrike in North Waziristan, Pakistan, in August 2011. While not claiming responsibility for the attack, the group stated about the ICRC: "Knowing that such organizations have remained in Libya since the war on the tyrant, this is then a sign for them that they must leave this land, because their work now is merely intelligence and missionary work.

In addition to these groups, Libyan jihadists have also called for attacks against Western interests in the country. One user, writing on behalf of fellow Libyans on a Libyan jihadist forum on September 10, 2012, responded to al-Qaeda's confirmation of Abu Yahya al-Libi's death by saying to America:

"The response will come to you even if later.

"You will not have any interest in Libya, even if it requires that we blow up the oil wells.

"We will target all your interests - education, tourism.. any interest will be a legitimate target.

"It is a war and you declared it, so don't dream of interests or agreements

In response, a fellow member wrote:

"Retribution, retribution. We will not be silent and just condole; rather, we must retaliate for the East and West to know that Muslims' blood is not cheap and that they will taste from the glass of humiliation and torture at our hands, Allah permitting.

"So, America will not enjoy it's life until we raise the banner of 'There is No God but Allah' over its buildings or atop its ruins if it refuses to submit."